Heatherwick at the V&A

I've mentioned Thomas Heatherwick on this blog before - here - but I'm delighted to see that an exhibition about his studio is just about to open at the V&A Museum next week.

'Heatherwick Studio: Designing the Extraordinary' will be the first retrospective on the wide-ranging work of this young British sculptor/artist/architect/designer/genius. A review this evening on BBC R4 Front Row suggested that while the exhibition is small (one room effectively) it is packed with exciting things - after all, he has designed everything from a chair to a power station, not to mention the soon-to-be-public new Routemaster London Bus.  Should be impressive.

Photographer Gabriele Galimberti recently had his photoessay on children around the world and their toys printed in The Times magazine (Sat 26th May).

"At their age, they are pretty all much the same, they just want to play" was his conclusion after 18months working on the project.

"The richest children were more possessive. At the beginning, they wouldn't want me to touch their toys, and I would need more time before they would let me play with them. In poor countries, it was much easier. Even if they only had two or three toys, they didn't really care. In Africa the kids would mostly play with their friends outside." View the whole series, and others, here.
Posted by Chris Otley No comments: Links to this post

Burtynsky at The Photographers Gallery

Good news for photography fans: The Photographers Gallery has finally reopened after a long period of renovation. Irish architects O'Donnell + Tuomey have created several new floors of exhibition space and overhauled much of the building - it is clean and crisp while remaining understated, allowing you to focus on the work on show.

Although some have described the decision to host Ed Burtynsky's OIL photographs as a little predictable or safe for their re-launch, I'm certainly not complaining - it is quite simply fantastic. Burtynsky has long been tracking the process and impact of extracting and using oil, and imbues his large-scale photographs with a real sense of the sublime - shock and awe, horror and beauty all at once. Make sure you don't miss the exhibition.

I recently visited Ori Gersht in his studio. What a fantastic work space! Although he was a little reticent to fully discuss his work, it was exciting to see some work-in-progress and a few clips from his impressive, painterly photographs. I was really surprised to see that he'd managed to get permission to show his 'explosion' film in Times Square NYC, given their sensitivities over such imagery.

Here's a few bits and pieces...

A still from Gersht's piece based upon Cotan's famous still life painting from 1602 - here with a bullet exploding through a pomegranate though! Here's the film - beautifully lit.

Other film work often references paintings; here, Gersht's interest in Dutch still life paintings manifested itself in similarly filmed high-speed photography explosions. The flowers were frozen using liquid nitrogen, allowing for them to shatter in such dramatic fashion - here's a 'making of' slideshow: 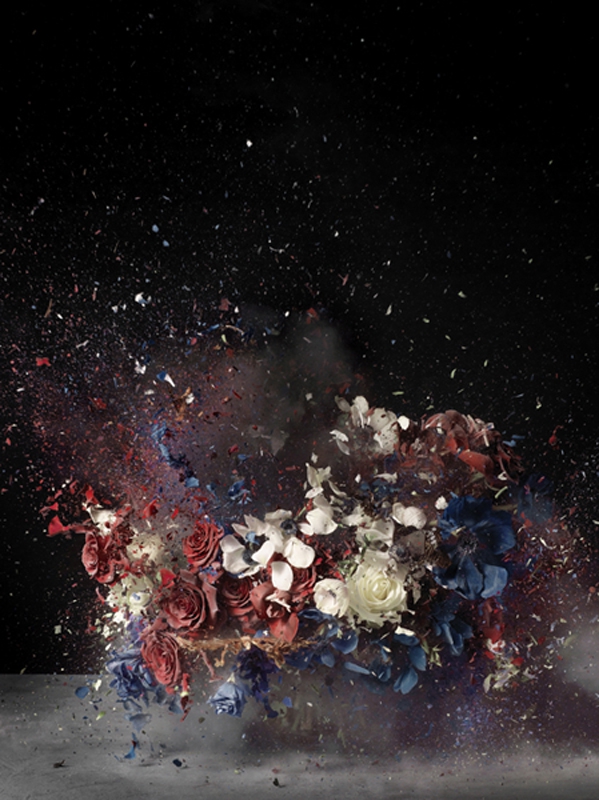 
It was a shame Gersht wasn't more open about in discussing his work, as there's some really complex issues at play above simple transcription; often revolving around his Israeli heritage, the holocaust, and other key historical events and issues. A few years ago, at the Photographers Gallery, I saw his film of falling trees, 'The Forest' - below - filmed in the Ukraine, on a site of Nazi atrocities against the Jews. The peace of the forest is shattered by the creaks and groans of falling trees, which somehow retain a beauty through the quality of the photography.

Anatomical Drawings at the Queen's Gallery

This weekend, I went to the recently opened da Vinci anatomical drawings exhibition at the Queen's Gallery.  I'm not sure why I go there so rarely - each occasion has always impressed. Tucked away behind Buckingham Palace, it reminds you why London is a fun place to live as you become an honorary tourist again walking past the Household Cavalry on duty. You MUST pre-book your timed entry tickets though - the queues are ridiculous, and on the day sales run out by around 11am. If you have an advance ticket, expect to only queue for around 10mins. If you get your ticket stamped on exit, it's good for a year. Once in, it's impressive - numbers have for once been carefully managed, and there's no real scramble to get a close look at the work, which is just as well given most objects on show are taken from da Vinci's sketchbooks.

I was also impressed that photography was allowed - I suppose these are 'owned by the nation'. Highly recommended - absolutely remarkable draughtsmanship. Last week it was widely reported that the sale of (one of the several versions of) Munch's 'Scream' at Sotheby's made it the most expensive work of art ever sold, at $120m.

Strictly speaking, as The Economist has reported, this is not actually correct.

In real terms, adjusted for inflation, several more expensive works have been sold. 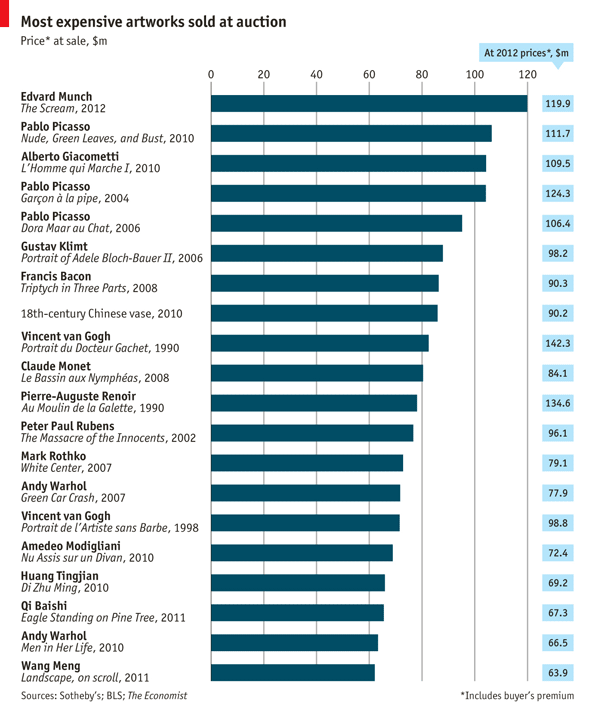 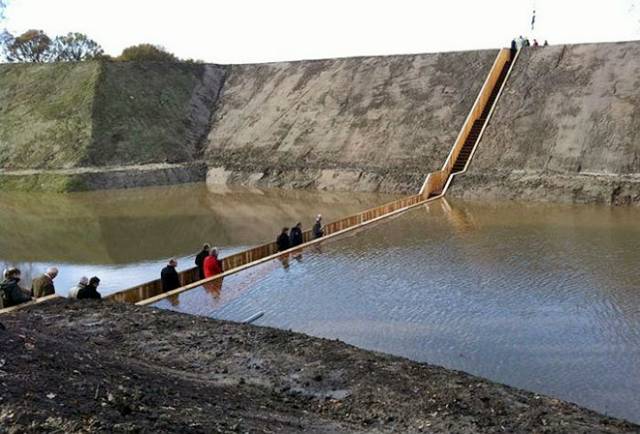 You may well have seen this already - it's been doing the rounds, but I thought it was worth posting: the fantastic 'Moses Bridge' by Dutch architects RO & AD Architects.  The sunken bridge provides access to a 17th century Dutch fort. 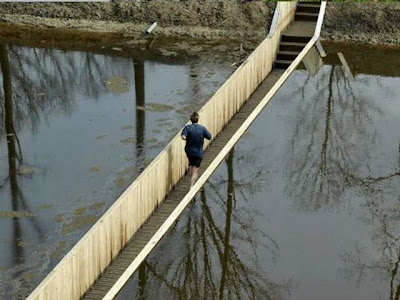 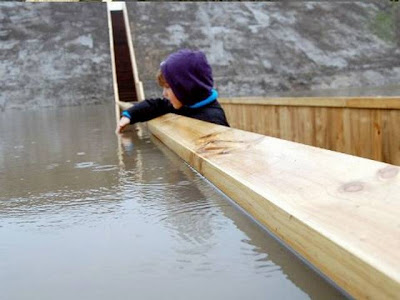 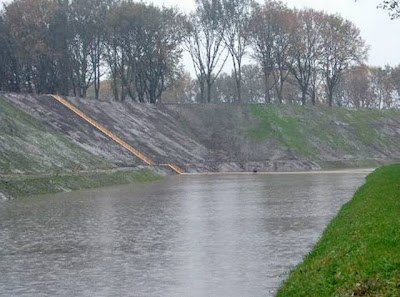 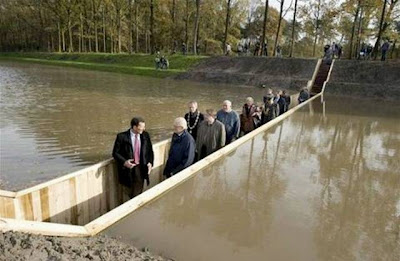 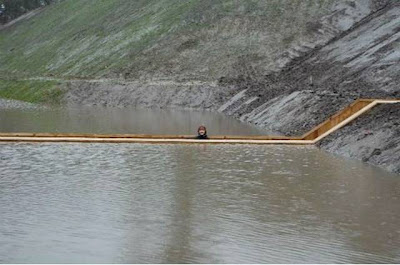