Archaeologist have discovered 13,000 year old finger paintings, created by girls aged around 3-5 years old.
The finger paintings are located deep in caves in the Dordogne. Reaching the caves would have required the girls to clamber and crawl through pitch black cave systems for half an hour.

BBC report and video here.
Posted by Chris Otley No comments: Links to this post

I've mentioned the Wellcome Collection on this blog before; its collection holdings create a fascinating blend of Art and Science.  Last weekend the FT featured 75 bizarre objects from their archives, and you can see a slideshow of the best by following this link.

Collection of 300 19th century tattoo's on human skin any one?
Posted by Chris Otley No comments: Links to this post

I called into the Jerwood Space last week, to visit the new 'Drawing Prize 2011' exhibition. Although I'd debate the definitions applied to a few works (video installations etc), there's a fantastic range of interpretations to the seductively simple act of applying graphite to paper.

This year's overall was Gary Lawrence, with his large, highly detailed piece, 'Homage to Anonymous'.

It's worth a trip in itself, but it's also minutes from Tate Modern, and access is free. Pop in.
Posted by Chris Otley No comments: Links to this post

Sotheby's are releasing a series of short documentaries on their website over the next few weeks - and judging from the first release, 'The Artist', they're going to be worth a watch, rather than being entirely glib marketing tools...

Here's a short preview of the first film:

Follow this link to the Sotheby's site to watch the full (10 minute) film, and keep an eye out for the next releases. Fascinating shots of Koons' assistants at work in his studio too!
Posted by Chris Otley No comments: Links to this post

All the details here.

Lots to see, from installations in St Paul's Cathedral to a Lego greenhouse in Covent Garden...

This video from the Guardian showcases the moving work being undertaken in Japan to clean up, and restore tsunami damaged photograph albums, and return them to their owners - many of whom have lost everything they owned.
Posted by Chris Otley No comments: Links to this post

RIBA have just announced the shortlist for their competition to redesign the humble electricity pylon.

There are more than 88,000 pylons currently in the UK, but the steel tower design has remained virtually unchanged since the 1920s.

Today, with far greater awareness of conservational and environmental concerns, with a huge investment in infrastructure expected in the near future, RIBA have created an open entry competition to raise awareness in the potential for a huge re-think.

Thousands of entries were received from architects and engineers to a class of 7 year old pupils.


You can see all the shortlisted entries here.
Posted by Chris Otley No comments: Links to this post

I can never remember Charles Ray's name when I want to - I always convince myself he can't possibly be called Charles Ray as there's Ray Charles... anyway.

Charles Ray. Previously I was only really familiar with his quite disturbing realist sculptures which play on issues of scale ('Family Romance' at the MoMA, NYC comes to mind), but I was never entirely satisfied with the level of detail - especially having subsequently become familiar with the similar work (and potentially similarly overused, even cliched concepts) of Ron Mueck.


However, this summer, I was absolutely astonished by a more recent Ray piece I saw in the Chicago Art Institute - 'Hinoki', 2007. 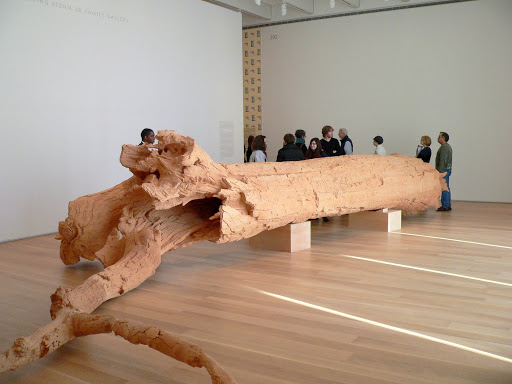 At first glance, it simply appears to be a fallen tree trunk. Most visitors passed through at walking pace, looking bemused.

After taking the time to read the information on the wall however, I was astonished. Ray had come across a fallen tree on his way home one day, and had found its form visually arresting. He had the tree cut into slices and transported back to his studio. He wanted to capture its form before it finally decayed away entirely - he had the whole trunk cast with silicone molds, before sending the fibreglass version of the tree to Japan, where he commissioned a master wood carver and his team to precisely replicate it in Japanese cypress wood ('Hinoki').


"At one point, I determined that its armature could be its pneuma, the Greek word for breath, wind, or life. Later, I considered making an inflatable sculpture but realized that the tailoring of the form would bring an unwanted complexity to the surface. It then struck me that the breath or life of the sculpture could be manifested in the very act of sculpting. Making a wood carving of the log by starting from the inside and working my way out would bring a trajectory of life and intentionality to this great fallen tree. With several friends, I transported the tree, cut apart by a chainsaw, back to my Los Angeles studio. Silicone molds were taken and a fiberglass version of the log was reconstructed. This was sent to Osaka, Japan, where master woodworker Yuboku Mukoyoshi and his apprentices carved my vision into reality using Japanese cypress (hinoki). I was drawn to the woodworkers because of their tradition of copying work that is beyond restoration. In Japan, when an old temple or Buddha can no longer be maintained, it is remade. I visited Japan often and had a difficult time bringing this work to completion and allowing it to go out into the world. When I asked Mr. Mukoyoshi about the wood and how it would behave over time, he told me that the wood would be fine for 400 years and then it would go into a crisis; after two hundred years of splitting and cracking, it would go into slow decline for another 400 years. I realized then that the wood, like the original log, had a life of its own, and I was finally able to let my project go and hopefully breathe life into the world that surrounds it."
Posted by Chris Otley No comments: Links to this post