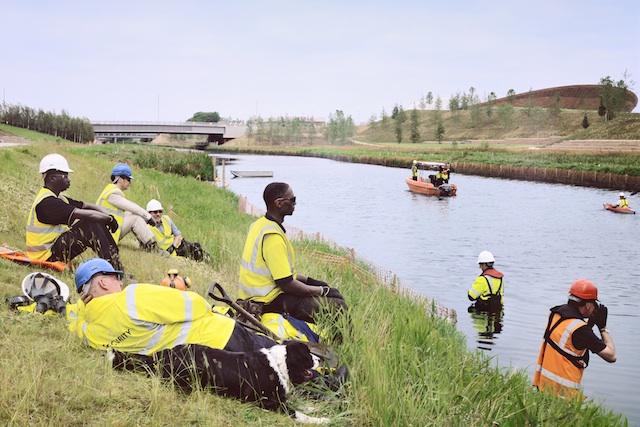 Grabie is the Olympic Park's 'artist-in-residence' and chose to honour the various employees of the park in an update on Seurat's 1884 painting.

I'll have to admit I've never been an enormous fan of Seurat's paintings - but I'm a HUGE fan of his astonishing drawings. I was lucky enough to see many of them in a fantastic exhibition at MoMA some years ago. Here's one of the studies produced in preparation for the 'Bathers' painting. 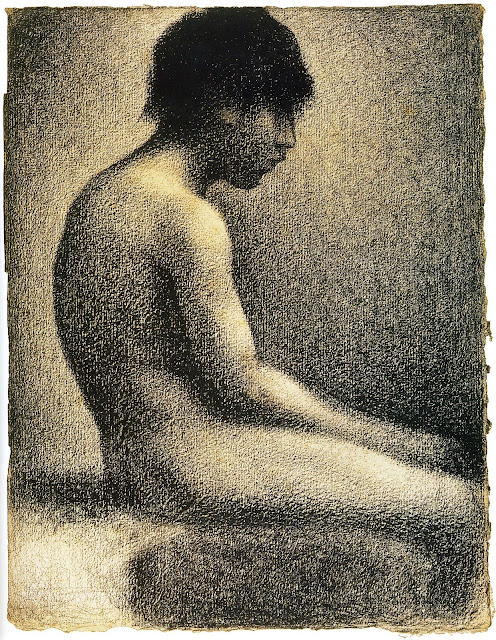 Mad Men meets Back to the Future. I certainly wouldn't mind a hovercar...

The shoot took place in a house designed by Alvar Aalto. Every time I go to New York and visit MoMA, I always check out his furniture design in their collection.
Posted by Chris Otley No comments: Links to this post

This week, a new exhibition is expected to draw the crowds at the V&A, London: cloth and garments made entirely from spider silk.

Simon Peers and Nicholas Godley have masterminded the project. It has taken them four years to extract the silk from more than a million golden orb spiders. The silk is completely undyed - it has a naturally occurring golden sheen. I've personally encountered these giants, which occur throughout Australia, Asia and Africa, whilst trekking through the jungle in Cambodia (see my photo, below). They have a horrendous habit of strategically placing their massive webs across footpaths and trails, then swinging into your face just when you're convinced there's nothing to worry about. My guide explained that they have a nasty bite - apparently the Madagascans employed to 'milk' the spiders for the shawl had to be trained in how to handle them properly.

The cloth created must surely rank as one of the rarest textiles in existence. For its weight, spider silk is stronger than steel, and its properties are of enormous scientific interest.

The spiders were placed in specially designed harness, and every 24 filaments extracted were twisted by hand to create a single thread. Three such threads became the silk used to weave this extraordinary object.

Although some spiders died whilst in captivity, the vast majority were released on a daily basis, and Peers and Godley say they ended up being defenders of the species - 'they really are very regal looking creatures'. The cloth drew enormous crowds when the piece was exhibited in New York some time ago. Catch it on show in London from Jan 25th until June.  Unmissable!
Posted by Chris Otley No comments: Links to this post

Albert Kahn set out in the early 20th century to create a pictorial archive of the world at the turn of the century. He amassed hundreds of thousands of black and white images, but also over 72,000 colour plates - the earliest form of colour photography.

In the week that Kodak has filed for bankruptcy, these images seem even more striking - a past era on a technology which was just unfolding - just over a century later, and the largest producer of film appears to have had its day. 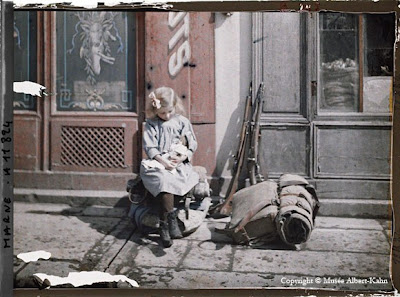 More here. Also, explore the Albert Kahn collection on its own site, here.
Posted by Chris Otley No comments: Links to this post

Photographic film company Eastman Kodak have today announced they will be filing for bancruptcy. Despite an extended period of employee redundancies, legal cases against patent infringements (by Samsung, Apple et al), and new printer technology, it seems the digital age has beaten the analogue system. The company who created the handheld camera have been on a downward spiral for some time, but had hoped that their increasing portfolio of digital innovations would allow them to pull through and reshape the organisation.

Kodak CEO Antonio Perez is still counting on patents to pull Kodak through bankruptcy. “Chapter 11 gives us the best opportunities to maximize the value in two critical parts of our technology portfolio,” Perez writes:


our digital capture patents, which are essential for a wide range of mobile and other consumer electronic devices that capture digital images and have generated over $3 billion of licensing revenues since 2003; and our breakthrough printing and deposition technologies, which give Kodak a competitive advantage in our growing digital businesses. More here.
Posted by Chris Otley No comments: Links to this post


Rube Goldberg machines...
Posted by Chris Otley No comments: Links to this post

Great new blog on Design & Communication (by Joe Leadbeater who some of you will know...)

Check it out here.
Posted by Chris Otley No comments: Links to this post

Searle was particularly famous for his spindly cartoon creations of the schoolgirls of St Trinian's, as well as the illustrations for the Molesworth series of books ['as any fule kno']. 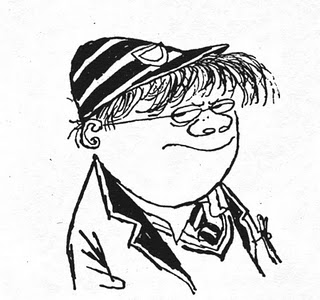 Although these quirky spiky ink drawings are great fun, the work from his days as a prisoner of war, held by the Japanese are different altogether. Some have been recently exhibited by the Imperial War Museum in London.

Given most of the London collections are free entry, I've never felt too cheeky paying $1 to get into the Met in NYC - if you're going to have a small sign which reads 'suggested entrance fee' then don't be put out if I don't meet the suggestion...

Anyway - check out this fascinating site, applying the concept to typefaces... I'm not encouraging you to only donate $0 like a Radiohead album... but you could...
Posted by Chris Otley No comments: Links to this post